Majestic in size and beauty, the fine, even texture of the light yellow timber of the native Australian tree, Araucaria cunninghamii is truly a magnificent timber species. Araucaria cunninghamii is a species of the genus Araucaria. Araucaria are a group of tree species native to the forested regions of Australia and South America and can grow up to 60m tall and 2m across the base. They are a slow growing tree that can live up to 450 years old and they certainly rival the coniferous forests of North America and Eurasia with their impressive beauty. In fact, they are considered the southern counterpart of the northern pine forests. The name Araucaria is derived from the 'Arauco', a region in Central Chile where the Araucani Indians live.

The Araucaria genus can be traced back to the age of the dinosaurs. Fossil evidence indicates that the genus reached its maximum diversity between 200 to 65 million years ago during the Jurassic and Cretaceous periods. At that time, the Araucaria genus occurred in both the northern and southern hemispheres and it wasn't until when the continents drifted and the southern supercontinent known as Gondwanaland was formed that Araucaria became solely confined to the southern hemisphere.

The black gemstone known as Jet is the northern hemisphere's fossil remains of its once great Araucaria forests. It was formed by ancient Araucaria trees washed out to sea, buried by layers of sediment and petrified over millions of years. Jet was a jewel most popular during Victorian England when it was worn as jewellery, designed to ward off evil spirits.

The Aboriginal Australians used the timber from Araucaria cunninghamii for the construction of boomerangs and coolamons. Aboriginals also used the sap to make glues used for axes and handles and other tools. Seeds were roasted and pounded into damper. Present day uses of the sap include anti HIV and anti cancer applications.

In 1823, John Oxley the British explorer set out from Sydney to the Moreton Bay area where he sailed into what was to become known as the Brisbane River. Upon entering the river he noted: "timber of such great magnitude, including a magnificent species of pine...in great abundance (which) if it should prove of good quality were of a scantling sufficient for the topmasts of large ships." 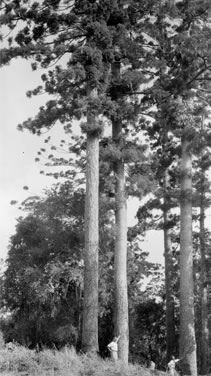 The King's botanist and explorer of the eastern coast of Australia, Allan Cunningham returned with Oxley to the site the following year and noted: "Hitherto in our examination of this river, we have been only gratified with a distant view of the Pine; immediately we approached one of magnificent structure, the Monarch of these woods. It was a healthy, well grown tree, exceeding 120 feet, clear of branches exceeding 80 feet. It was totally impossible not to halt a few moments to admire this noble tree which had all the habits of ramification of the Araucaria."

What Allan Cunningham and John Oxley were describing was the Moreton Bay Pine or Hoop Pine (Araucaria cunninghamii). Cunningham gave the species the vernacular 'Brisbane Pine' but eventually the species was scientifically referred to as Araucaria cunninghamii in honour of its founding botanist. Araucaria was attracting a large amount of attention from early explorers and it was Oxley's suggestion that it might be possible to use the timber for the topmasts of ships that attracted considerable attention to the species. As a result logs were collected from the Pine River area and were sent to Sydney for use in the maritime industry.

The Araucaria for the masts were carefully selected for their characteristics and then felled. The branches were then trimmed along their length and the scars sealed with pitch. When the Governor of the New South Wales Colony, Sir Thomas Brisbane visited the new penal colony of Moreton Bay in 1824 he was greatly impressed by the trees along the river and sent several logs to England for assessment. It was as such that Araucaria logs had the honour of being the first exports from Brisbane Town to England.

A few years later in 1828, standing on the summit of Mt Coot-tha, Cunningham described a view to the north-west as, 'lofty and forest covered hills, interspread with extensive districts of Araucaria which dark green stood out from the brownish hue of the gum trees' The timber trade throughout the colony increased rapidly and during the 1830's any official correspondence between Sydney and Brisbane regularly included requests for more Araucaria timber.

"The most valuable timbers of the colony are fast disappearing and that something must be done to stop the waste going on."

It was not only scientific voices that were raised in the forest conservancy debates. Richard Matthews Hyne, M.L.A. for Maryborough and an important timber miller addressed the Legislative Assembly in 1889.

"Anyone who understands the subject must come to the conclusion that before long the scrubs containing our most valuable timber will soon be exhausted...I am not one of those who say there is plenty of timber for our lifetime, and that the future can take care of itself..I would also draw attention to the very small area of the colony that contains valuable timber."

He called for replanting measures and the creation of a separate forestry department. The beginning of the native conifer planting program was set in motion in the 1920's. The Queensland Forest Service launched the first of it's commercial plantations in 1920/21 and more than 60,000 Araucaria seedlings were planted. By the 1930's 80% of all native plantation forests were Araucaria. Throughout the 1930's and 1940's the implementation of Araucaria continued to develop into a burgeoning market where it was successfully utilised into a multitude of products and applications from aircraft, furniture, boats and the building industry.

Following the Second World War growing timber enterprises continued to demonstrate the Araucaria timber's versatility and usefulness by substantially contributing to the economy of Queensland.

As a result the growing Araucaria industry was developed with an emphasis on three main philosophies:

The spirit of sustainability has remained the guiding management philosophy of Queensland's Araucaria resource to this present day.

Thanks to the wisdom of our forefathers and the responsible management of modern forest resource managers, the future for our Araucaria forests is very healthy. It is indeed true that from little things, things can grow to be world class...